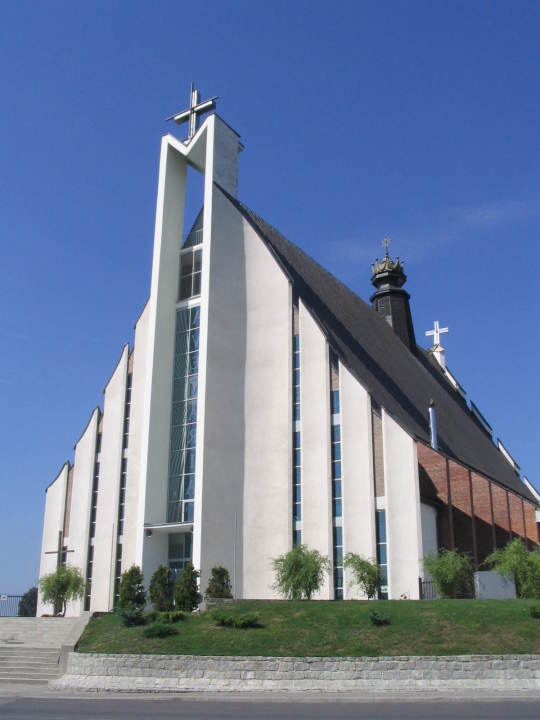 NIGHT VIGILS – on Saturdays, before the third Sunday of every month: it begins at 21.00 (Jasna Gora Appeal /Apel Jasnogórski/, the Holy Mass, Eucharistic procession), it ends at 5.00.

THE PRAYER EMERGENCY SERVICE to rescue small and big children – each Monday, it begins at 17.30 (the Holy Rosary, the Holy Mass and intercession prayer in front of the Holy Sacrament), it ends about 20.00 You are invited by the Community "In the School of the Holy Mother – Teacher of Young Persons".

THE MEETINGS OF THE GROUP OF PRAYER AND SUPPORT – on Tuesdays, after the evening Holy Mass.

THE VIGIL WITH THE QUEEN AND MOTHER OF ALL NATIONS – on the last Wednesday of every month, it begins at 17.30 (the Holy Rosary, the Holy Mass, intercession prayer).

THE GROUP "RENAISSANCE" – on Tuesday of every week (the Holy Mass at 15.00, joint prayer)

THE SICK PERSONS DAY – 11th day of every month, at 11.00 the Holy Mass and prayer on behalf of sick persons and with the sick persons.

You may receive full indulgence on 2 days during the whole year:

1. 3 May during the Feast of Our Holy Mother – Queen of Poland

2. on the first day of September – the beginning of a new school year in Poland. You may also receive indulgence every time you visit this Holy place. (Indulgence – means that the Lord will excuse the wordly punishment for sins which are already absolved). 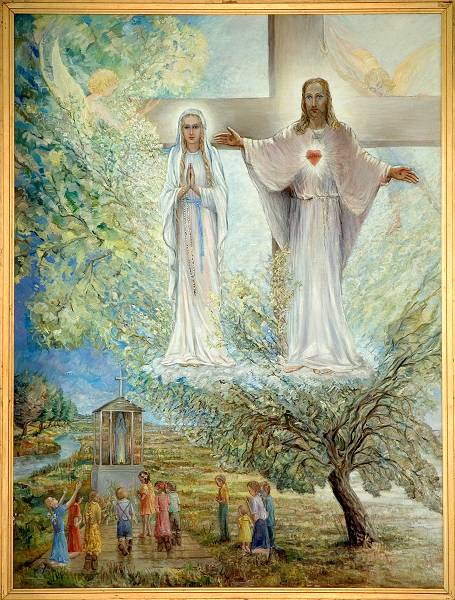 Act of consecration
Mother of the God, Immaculately Mary!
I consecrate to You my body and my soul,
All my prayers and sufferings,
All whom I am and all I possess.
I gave myself heartily to You in a slavery of love.
I leave You the full freedom in leading me for redemption of people and for help to the Holy Church, whose Mother You are.
Since this time, I want to do everything with You,
through You and for You.
I know that I will reach nothing using only my own power.
You can do everything what is the Will of Your Son,
And You always conquer.
Mother – Help of Christian cause that my family, Parish and the whole Homeland becomes a true Kingdom of Your Son and Yours.

Student Prayer
O, Holy Virgin Mary whose religious intercession obtained admirable progress in knowledge and in piety, for innumerable minds, uneducated and incompetent.
I choose You as a Leader and Guardian of my studies.
O, Mother of the Good Studies, through Your intercession, let the Holy Ghost fill my soul with light and strength, discernment and humility.
Let the Holy Ghost give me honourable will, ability, memory, enough easiness of mind, especially heart submission to enable me to act according to advices of the God’s Wisdom.
O, Mary, cause that I, being under Your care and confident in the Church teaching, could walk safely, courageously and persistently on the way of the Truth and Righteousness in order to reach recognition, love and everlasting possession of Your Son, Our Lord – Jesus Christ. Amen.

The Crown of the Twelve Stars

The Crown of the Twelve Stars was composed by Saint Joseph Calasanz, the Father of the First Public School s, The Patron Saint of the Christian Popular School, and the Founder of the Order of the Pious Schools or commonly known as The Piarist Fathers.

INTRODUCTORY PRAYER
Let us praise and thank the Most Holy Trinity, for having shown to us the Virgin Mary clothed with the Mysterious Crown of Twelve Stars upon her head.
Response: For ever and ever. Amen.

DEDICATED TO THE FATHER

Let us praise and bless the divine Father for having chosen her as his daughter.
All: Amen. Say The Lord's Prayer

Praised be the divine Father for having predestined her to be the mother of the divine Son.
All: Amen. Say Hail Mary...

Praised be the divine Father for having preserved her from all sin in her conception.
All: Amen. Say Hail Mary...

Praised be the divine Father for having adorned her with the highest gifts in her nativity.
All: Amen. Say Hail Mary...

Praised be the divine Father for having given her Saint Joseph as a pure spouse and companion.
All: Amen. Say Hail Mary; Then Say Glory...

DEDICATED TO THE SON

Let us praise and bless the divine Son for having chosen her as his mother.
All: Amen. Say The Lord's Prayer

Praised be the divine Son for having become incarnate in her womb, and for having remained there nine months.
All: Amen. Say Hail Mary...

Praised be the divine Son for having been born of her and for having given her milk by which he would be nourished.
All: Amen. Say Hail Mary...

Praised be the divine Son for having been pleased in his childhood to be educated by her.
All: Amen. Say Hail Mary...

Praised be the divine Son for having revealed to her the mysteries of the redemption of the world.
All: Amen. Say Hail Mary; Then Say Glory...

DEDICATED TO THE HOLY SPIRIT

Let us praise and bless the Holy Spirit for having chosen her as his spouse.
All: Amen. Say The Lord's Prayer

Praised be the Holy Spirit for having revealed, first to Mary his name of Holy Spirit.
All: Amen. Say Hail Mary...

Praised be the Holy Spirit through whose action she was at once Virgin and Mother.
All: Amen. Say Hail Mary...

Praised be the Holy Spirit through whose power she became the living temple of the Most Holy Trinity.
All: Amen. Say Hail Mary...

Praised be the Holy Spirit by whom she was exalted in heaven above all creatures.
All: Amen. Say Hail Mary; Then Say Glory...

For the Holy Church of God, for the unity of Christians and for the peace and salvation of the whole world, let us pray [sing] together.

THE HAIL HOLY QUEEN
Hail Holy Queen Mother of Mercy, hail our life our sweetness and our hope, to you do we send up our sighs mourning and weeping in this vale of tears. Turn then, most gracious advocate your eyes of mercy towards us. And after this exile show unto the Blessed Fruit of your womb, Jesus. O Clement, O Loving, O Sweet Virgin Mary.

THE LORDS PRAYER
Our Father who art in heaven,
Hollowed be thy name.
Thy kingdom come,
Thy will be done on earth, as it is in heaven.
Give us this day our daily bread,
And forgive us our trespasses, as we forgive those who trespass against us,
And lead us not into temptation,
But deliver us from evil. Amen.

HAIL MARY
Hail Mary, Full of grace,
The Lord is with you,
Blessed art thou among women,
And blessed is the fruit of thy womb, Jesus.
Holy Mary, Mother of God,
Pray for us sinners, now and at the hour of our death.
Amen.

GLORIA
Glory be to the Father,
And to the Son,
And to the Holy Spirit.
As it was in the beginning, is now, and will be forever. Amen. 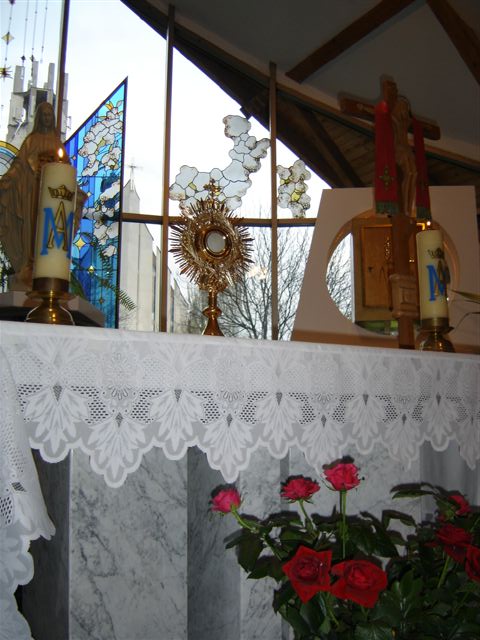 The History of the Shrine

The history of the Shrine goes back to the time of apparitions, which took place between 1943-1949. There had been no church in the Siekierki region before or during the second world war. The people wanted to found a church, but soon the second world war broke out and made it impossible. Children prayed beneath the Cross. One of those young people was a 12 years old girl - Władysława Papis (maiden name: Fronczek-Frauczuk). One day, when she returned home from the Cross and continued to pray, suddenly she saw the Holy Mother appear over the cherry tree. She prayed further. The Holy Mother looked at her and waited. Władysława felt that she had forgotten about somebody in her prayers. She remembered her uncle who was very sick, and asked for his health to be restored. However, the Holy Mother still waited. Władysława understood that her prayer was not finished. And she said: "I ask for the recovery of my uncle, but if it does not happen, please take him to Heaven, beside You, dear Mother". At that moment the Holy Mother turned around 3 times towards the right and disappeared. This happened on 3rd May 1943 - a day, which is in Poland the Feast of Our Holy Mother, the Queen of Poland. Our Lord Jesus Christ appeared for the first time on 28th June 1943 at this place. The last apparition took place on 15th September 1949 during the Feast of Our Lady of Sorrows. Our Lord Jesus said: "I have come to you to tell you that I am with you. I am leaving now, but you pray to My Mother, as She listens to your prayers". During the apparitions the Holy Mother dictated a Litany, a Chaplet and a song. Both Our Lady and Our Lord Jesus left many messages for believers. One of them is that the Holy Mother appeared as a Teacher of Young People. The first Chapel at the place of apparitions was built in 1945-1946. The Chapel was opened on 3rd May 1946 during the Feast of Our Holy Mother, the Queen of Poland. The Chapel was extended 3 times: in 1979, 1980 and 1981. After that a new chapel was built – as a votive offering for healing from alcoholism. The current Chapel was blessed by Primate Józef Glemp on 29th August 1999. The first Holy Mass was said on 3rd May 1977 and after that the Holy Masses were said regularly, particularly on Feast Days. Primate Cardinal Stefan Wyszyński entrusted the place of apparitions to the Piarist Order on 16th November 1980. After His death, Cardinal Józef Glemp consecrated the square on which the church would be built. Bishop Zbigniew Kraszewski embedded the corner stone of the church and consecrated the lower church on 22nd October 1988. The Parish Church under the invocation of the Holy Virgin Mary – the Queen of Believers was established on 15th March 1988. The church was blessed by Cardinal Primate Józef Glemp on 17th September 1994. The Diocesan Shrine under the invocation of the Holy Mother – the Teacher of Young Persons was established by Primate Józef Glemp on 31st August 1997.

3. Night vigil, on the Saturday before 3rd Sunday of every month. It has taken place regularly since July 1982. It has its origin during the time of apparitions. The first night vigils were in October 1943 and in April 1944. Such vigil lasted 3 nights, night by night. Then the Holy Mother asked to pray during the entire first Fridays. 24 persons chose the hours and prayed at home in reparations for sins of the whole world. Father Edward Szajor, Piarist decided that night vigils would be held on Saturdays before 3rd Sunday – by analogy to 3rd May, as the Holy Mother appeared on 3rd May 1943. 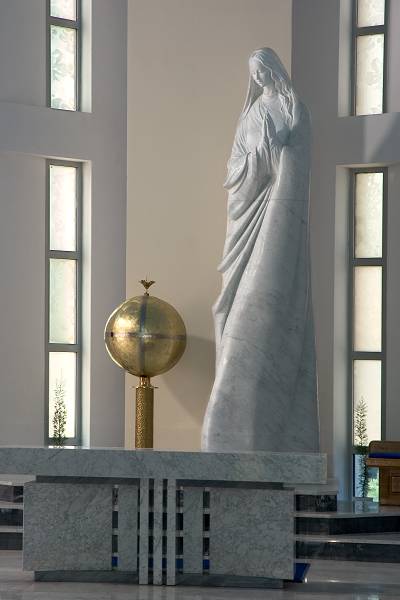 General Curia of the Piarists:
http://www.scolopi.org

Children of the Eucharist - Dzieci Eucharystii 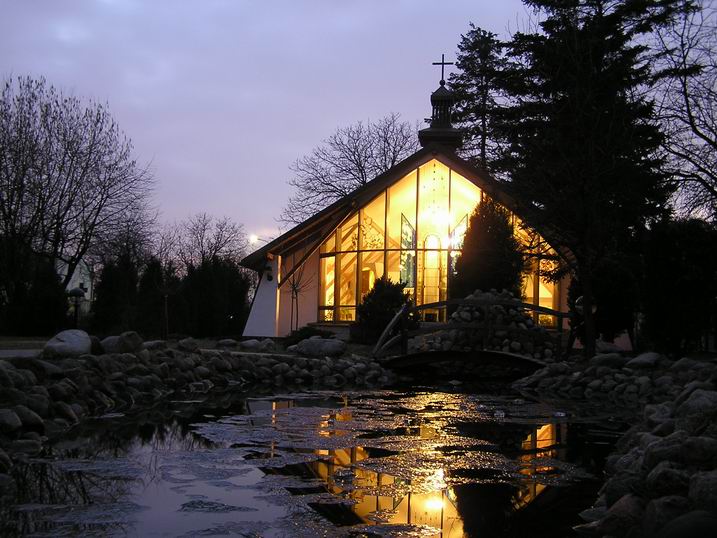